In many cultures people have long feared the so called "evil eye". It is believed to cause injury or bad luck for the person at whom it is directed, for reasons of envy or dislike. A protective symbol against this curse is the Hand of Fatima or the Hamsa. The symbol stretches from judaism to islam but has in both religions the same meaning. Hamsa means five and is in islamic belief the hand of Fatima Zahra, the daughter of Prophet Muhammad. In judaism it is also called Miriam's hand, as regards to the sister of Aaron and Moses. In Arabic (and Berber) tradition this symbol is related to warding off the evil eye, as exemplified in the saying "khamsa fi ainek" ("five [fingers] in your eye"). 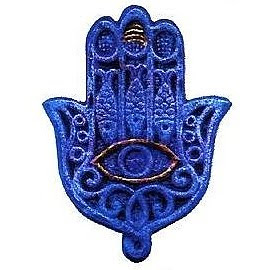 Even though I haven't always known the full story behind these symbols they have always been a part of my life and my culture. In Iranian culture another element of protection are the seeds of Aspand (also called Esfand, Espand and Harmal). These are burned, causing little popping noises that releases a fragrant smoke. This smoke is then wafted around the head of those afflicted by or exposed to the evil eye (the gazing of envious/evil strangers). The popping of the seeds is believed to be related to the breaking of the evil eye spell. Dried aspand capsules are sometimes also worn as protection against the evil eye.

Symbols, such as the evil eye, are things that in modern days have become a sort of fashion accessory. I am pretty sure alot of you have seen the beads around, especially when you go to holiday resorts such as Turkey and Greece. It has a certain beauty to it, I admit, but it is also important to know that these symbols have specific meanings and are very important in a lot of cultures.

So in whichever way you prefer, make sure you keep your protections close! Haha. Sleep tight now / P.
Posted by .. at 21:54